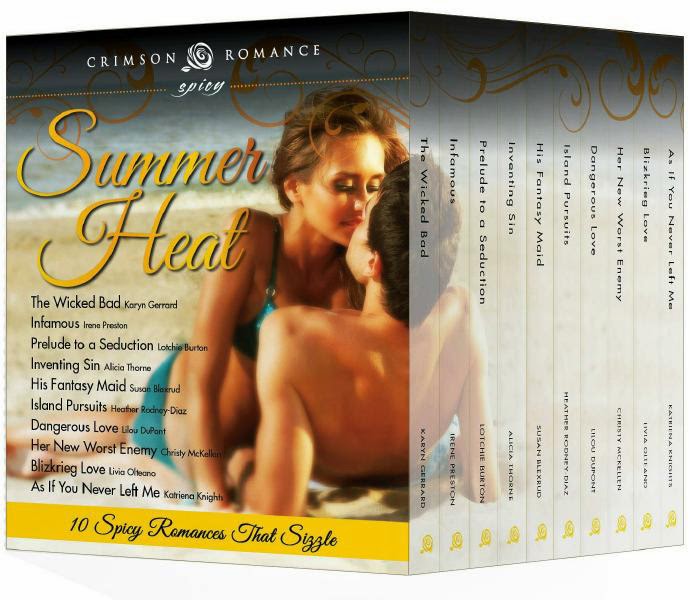 Do you like it hot?  Crimson Romance just released a new 10-book box set of their steamiest titles for only $0.99.  You heard right!  These aren’t short stories or novellas but ten full-length romances all in one big bundle for less than a dollar. Bought separately, you would pay over $40 for these same books.  This collection will be available for a limited time , so don’t miss out!

On an even tighter budget? Kindle Unlimited subscribers can borrow all the individual titles FREE as part of their subscription. Just click the Free on Kindle Unlimited links under each title below to download.

Blurb:
When the summer sun beats down on the beach, Crimson Romance turns up the sizzle between the pages. From hot bikers to powerful venture capitalists and those oh-so-sexy military men in—and out—of uniform, these ten books put the spotlight on the heroes who make us melt.

Summer Heat includes all 10 of the following titles:

The Wicked Bad by Karyn Gerrard
Is Veronica a good girl who longs to rub against...The Wicked Bad?
Free on Kindle Unlimited

Infamous by Irene Preston
's favorite wild child moves to the 'burbs in this heart-warming romance that reviewers call fun, flirty, and 10 kinds of hot.
Free on Kindle Unlimited

Prelude to a Seduction by Lotchie Burton
Can an unexpected romance develop between an over-confident, on-the-prowl playboy and his unsuspecting and uncompromising prey?
Free on Kindle Unlimited

Inventing Sin by Alicia Thorne
Dumped by her ho-hum boyfriend, English professor Gabriella Kurtz invents the perfect imaginary man to replace him . . . and gets the surprise of her lifetime when a real flesh-and-blood hero takes advantage of her little white lie.
Free on Kindle Unlimited

His Fantasy Maid by Susan Blexrud
Dr. Amy Maitland is a first year resident physician, but she leads a double life...as a fantasy maid.
Free on Kindle Unlimited

Island Pursuits by Heather Rodney-Diaz
Adrian and Cory begin a sizzling affair in their island paradisebut what they both discover about the past threatens to destroy any chance of a happily ever after.
Free on Kindle Unlimited

Her New Worst Enemy by Christy McKellen
Ellie's no-strings weekend fling with her brother's best friend should be the easiest thing in the world to walk away from, so why is she finding it so difficult?
Free on Kindle Unlimited

Blitzkrieg Love by Livia Olteano
Ellie's no-strings weekend fling with her brother's best friend should be the easiest thing in the world to walk away from, so why is she finding it so difficult?
Free on Kindle Unlimited

As If You Never Left Me by Katriena Knights
Rey wants Joely back, But will his carefully laid plans disintegrate when she finds out what really brought him home to ?

Still not sure? Here are a few excerpts to help you make up your mind!

The Wicked Bad by Karyn Gerrard

Blurb:
Dark and brooding, Nick Crocetti is a bad boy in looks and demeanor. Veronica Barnes needs a new start, and Nick is a complication she doesn’t need.
Can they break down the barriers of past heartbreak, or is Veronica just a good girl who longs to rub against “the wicked bad”?

Excerpt:
She followed him toward the beach. The shoreline wasn’t very big, but private, as you couldn’t see the road or much else from their vantage point. Wonder how many other women he brought here, she thought cynically.

He spread the blanket and assisted her in sitting down. Again, the touch of his hand made her face flush as well as parts further south. Nick sat next to her with one leg bent and he rested his arm on the top of his knee. They sat quietly and gazed out over the water. The waves caressed the sand with a serene almost hypnotic sound.

“I saw you talking to that wuss, Jake Spooner, as I left the other day. I can imagine what he said about me,” Nick said in a voice so soft, she hardly recognized it as his.

“Um, he said you were in prison—” she began.

“Jail. Not prison,” he retorted.

“You’ve got the cop for a brother, you tell me,” Nick snapped. He shook his head, more gently he said, “Sorry. It’s a touchy subject. City jail, for assault and destruction of property. Prison usually means a state or federal beef. Mine was local and a long time ago. I did my time and it’s over. I don’t like talking about it.”
“He called you a thug and said you deal drugs among other things.” She shouldn’t be telling him this, but the words tumbled out of her.

“Really? And still you went out with me? Are you some thrill seeker, one of those good girls eager to rub up against some wicked bad? Is that why you’re here? I’ll be as bad as you want, just say the word.”
His voice grew tight and edgy. Barely restrained anger simmered below the surface, she could hear it.

“I’m just telling you what Jake said, you asked.”

Nick stared at her for several moments. “Yeah. I did. Sorry. I haven’t been out on a date in awhile.”

“Oh, I didn’t say I haven’t been with women, just haven’t been on a date.” The right corner of his mouth twitched in what Veronica supposed was amusement.

About Karyn:
Karyn lives in a small town in the western corner of . She wiles away her spare time writing and reading romance while drinking copious amounts of Earl Grey tea. Tortured heroes are a must. A multi-published author with a few best-sellers under her belt, Karyn loves to write in different genres and time periods, though historicals are her favorite. As long as she can avoid being hit by a runaway moose in her wilderness paradise she assumes everything is golden.

Karyn’s been happily married for a long time to her own hero. His encouragement keeps her moving forward.
http://www.karyngerrard.com/

Blurb:
Jessica Sinclair is ’s favorite wild-child, so what’s she doing burning cookies and playing house in the 'burbs?  Conservative soccer dad Morgan Riley can’t figure it out but he’s happy to have her home and heating things up in his bed.  Then Jessica finds herself back in the tabloids…with Morgan’s teenage daughter right next to her.

Excerpt:
In the elevator, he fumbled for the room key that would allow them access to the suites on the top floors. His hands felt big and awkward as they swiped the key through the reader. If you stripped me naked on the hors d’oeuvres table. . . .Christ. She always had a way of knocking him off balance, of peeling away every last bit of self control. She had thrown the words out so casually, and as soon as she said them he had pictured doing just that—imagined shoving aside the crudités and shrimp cocktail and spreading her out like his own personal feast.

The doors closed and she was in his arms. He pushed her against the elevator wall, his tongue thrusting urgently into her mouth. She wound around him, humming incoherent words of encouragement. They weren’t nearly close enough. She tilted her head back, inviting his tongue deeper. He was drowning in the taste of her when he felt her hands slide down between them. His body jerked.

They were still in the elevator. He was damned if he was going to make love in a public elevator. He managed to wrest her hands away from him and anchored them above her head with one of his own.

“Not here.” Could she hear the desperation in his voice?

About Irene
http://www.irenepreston.com/
Irene Preston has to write romances-after all, she's living one! As a starving college student, she met her dream man who whisked her away on a romantic honeymoon across . Today they live in the beautiful hill country outside of where Dream Man is still working hard to make sure she never has to take off her rose-colored glasses.
Posted by Cara Carnes at 7:44 AM